HADLEY AND ERNEST IN PARIS

Hadley and Ernest were much poorer than many of their friends as they began their lives in Paris in the 1920s, though “we always had money for anything we really wanted to do,” Hadley recalled, “And we always had money for whiskey.” At first, the Hemingways lived at 74 rue du Cardinal Lemoine on the Left Bank. During the winters, they sometimes dined on pigeons, caught in the Luxembourg gardens, and strangled when Ernest knew the gendarme had turned his back.

Hadley sacrificed many luxuries because she believed so strongly in Ernest’s career. “I never expected to find anyone into whose life I could fling my spirit – and now I can,” she wrote. This was a philosophy that would see her through the ups and downs of marriage to volatile Ernest: “Every side of me backs you up,” she wrote to him. Their marriage, described so tenderly in A Moveable Feast, was mostly a happy one. Together, Hadley and Ernest learned to ski, to bet on horses, to speak French with the roughnecks from the bal musette, and, above all, they learned to drink (in his memoir, Hadley and Ernest are never without a glass – or a bottle – of wine). 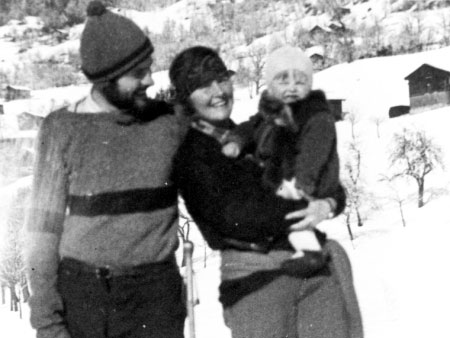 Ernest, Hadley and baby Bumby skiing in Austria in 1925

Their happiness was marred, however, when Hadley lost a suitcase of Ernest’s which was packed full of short-stories and his first novel (including the carbons). Nearly everything he had ever written was gone. “Hadley made the job complete,” Ernest wrote to Fitzgerald. Many biographers trace the breakdown in trust between them to this mistake at the Gare de Lyon in 1922.