ERNEST HEMINGWAY: The Writer and his Critics 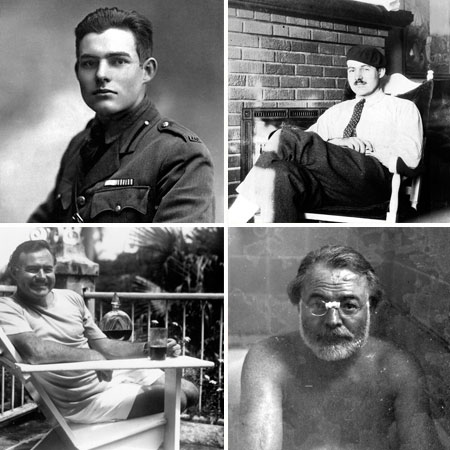 Ernest Hemingway was born on July 21, 1899 in Chicago, to Grace and Ed Hemingway. His mother (with whom he had an extremely strained relationship in later life) was musically trained as an opera singer, and his father was a physician. Ernest spent most of his holidays at Walloon Lake in Michigan, which inspired many of his short stories.

After his wounding on the Italian Front (he was an ambulance driver for the Red Cross), Ernest moved back to the States where he soon met Hadley Richardson at a party in 1920. After their marriage they moved to France: it was here Ernest began his writing career under the tutelage of the Anglo-American writers who had made their artistic colony in the heart of Paris.

Within five years, Ernest had published In Our Time and The Sun Also Rises, both considered cornerstones in the Modernist canon. “It was almost as if he’d had no real apprenticeship,” biographer Paul Hendrickson writes of Hemingway in his twenties: “but had sprung full-blown into American consciousness as a serious writer.”

After his divorce from Hadley, Ernest and second wife Pauline moved back to America, eventually settling in Key West. The 1930s turned into a prolific period for Hemingway: it was here Ernest wrote A Farewell to Arms, Winner Take Nothing, Death in the Afternoon and The Green Hills of Africa. Though each book sold gorgeously, the critics – whom Ernest variously called “knife-throwers”, “eunuchs” and “the lice that live on literature” – had become disillusioned with the author.

Whether it was his work or his public image that proved such a turn-off is unclear: many thought his roles  of bullfighter, boxer, game-hunter or deep-sea fisherman showed a “truculent he-manishness”.  The critics found Ernest’s work for Esquire magazine particularly galling: “The Hemingway of these loose disquisitions is arrogant, belligerent and boastful,” Edmund Wilson wrote, “and is certainly the worst-invented character to be found in the author’s work.”

However, the same critics soon heralded For Whom the Bell Tolls (1940) as a return to true form for Hemingway. It was both a critical and popular success: the book sold “like iced daiquiris in hell”. By now Ernest was married to his third wife, the war reporter Martha Gellhorn, and they lived in Cuba.  But during the Second World War – and indeed most of the 1940s – he encountered another dry spell and wrote little. To his wife, he said, “You’re the writer in the family, now, Marty.”

Hemingway broke his decade of publication silence with Across the River and Into the Trees (1951), which was greeted with howls of pained laughter. The novel, critics wrote, revealed the worst part of the author’s personality, and contained within it an almost exultant nastiness. In the New Yorker, Alfred Kazin wrote that Across the River was “one of the most confused and vituperatively revealing self-portrayals by an American I have ever seen.”

Ernest had “bet his shirt on and worked his heart out on” this book, and the criticism made him feel profoundly depressed. In 1952, however, he published The Old Man and the Sea. It was an instant, overnight success – and the parallels between Ernest and Santiago are clear. Santiago had gone “eighty-four days now without taking a fish”; Hemingway had gone ten years in labouring over his previous book. Both see their prizes voluptuously savaged by the waiting sharks.

Now married to his fourth wife, Mary Welsh, the 1950s was another quiet era for Hemingway the writer. He was involved in two serious plane crashes in Uganda in 1954, and sustained serious concussions. Despite the cerebral fluid leaking from his brain, he fobbed off medical help and carried on drinking to numb the pain. Injuries from the crashes meant he was too ill to receive his Nobel Prize in person.

Ernest continued to drink very heavily. In the 1950s he suffered terrible health problems: partially because his injuries from the plane crashes were not adequately addressed, and because his drinking and eating gave him terrible blood pressure. Though he was writing still (he wrote unfinished drafts of The Garden of Eden, A Moveable Feast, Islands in the Stream and True at First Light – all posthumously published) he published very little. Ernest began to believe he no longer had it in him to produce good work. “Writing” he said, “it’s beating the pith from me.”

In the summer of 1961, he committed suicide.